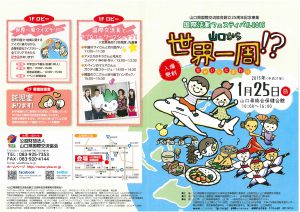 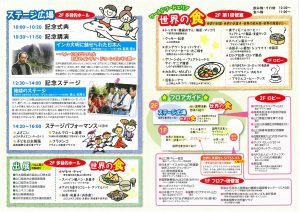 The YIEA has been working to promote understanding of the world’s many different cultures, and create a peaceful and flourishing international community since its founding on January 25, 1990. This January it will finally be reaching its 25th anniversary.

In celebration of these last 25 years and a bright future, the YIEA is working with international groups throughout the prefecture to hold an anniversary event. Whether you’ll be bringing your friends or family, we look forward to seeing you!

Hiroshi Sakane (Director of the Amano Museum in Peru)

How did the Incans build such an advanced civilization without a writing system or iron tools? How did their civilization fall almost overnight? Hiroshi Sakane, well-versed in the civilizations of Ancient Peru, will discuss the mysteries of the fall of the Incan Empire. His grandfather, Mr. Yoshitaro Amano, founder of the Amano Museum, will speak about his adventures in Peru.

Norihiko Kuwayama is a Japanese doctor who has also worked to provide medical assistance internationally to countries that have experienced disasters such as Palestine and East Timor.  In “A Global Stage” he will speak of the people that he met, and their moving stories, accompanied by original music and images. His office, in Natori, Miyagi, has also experienced the power of earthquakes during the 2011 Tohoku Earthquake. He will introduce you to some of the many people who are working hard to ensure that we remember the disasters of the past.

★Food and Drink from around the World

From traditional Japanese sweets and green tea, to German wine and sausage, there will be a wide selection of international cuisine available.  Travel to the Americas with Brazilian pão de queijo and American chocolates, or visit nearby Korea with delicious tteokbokki and makgeolli. Taste different teas and coffees from Russia, Brazil, and East Timor.  You’ll also find delicious food from China, Spain, Thailand and more, as well as a selection of Fair Trade products.

★Workshops ~ Crafts, Clothes and Games from across the Globe

l  Workshops with the Coordinators for International Relations

l  Around the World Trivia

As you make your way around the event, visiting many countries, you can answer trivia questions.  There’s a prize for anyone who answers all of the questions

Try on a traditional Japanese kimono

Try out kendama and calligraphy

l  Clothing of the World

See and try on a variety of traditional clothing

There are more than 100 international organizations in Yamaguchi Prefecture. Check out the many booths and talk with the members to see what kind of activities and events they are planning.

Hear stories from members of the Japan International Cooperation Agency about their work in various countries, including Ethiopia, Guatemala, and Nepal.  You can also taste beverages from many different countries. 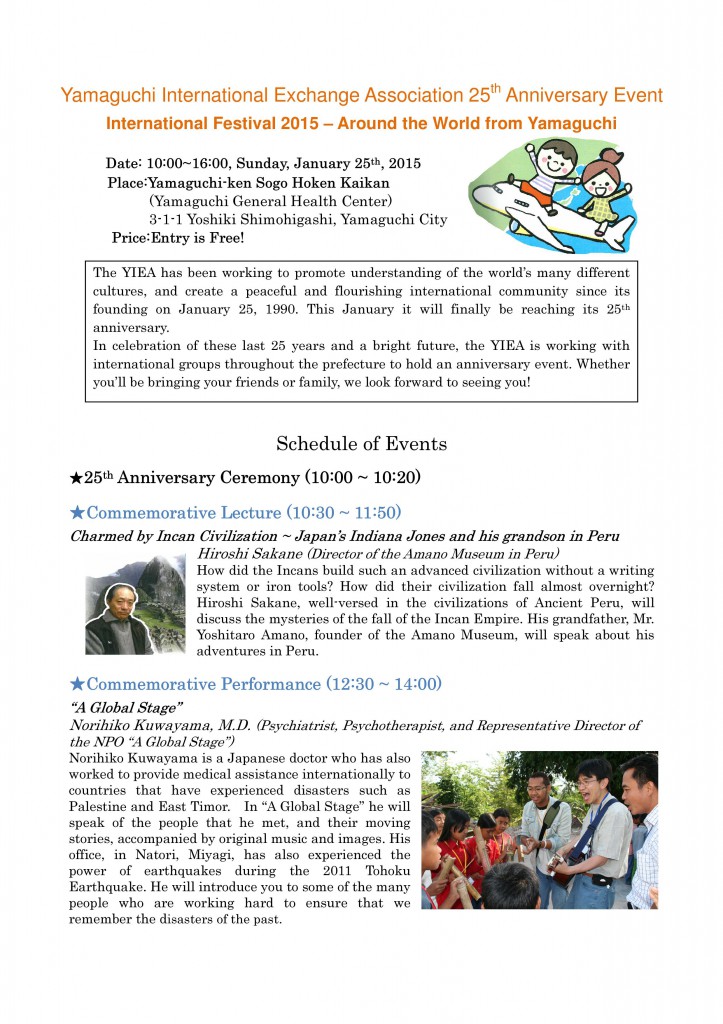 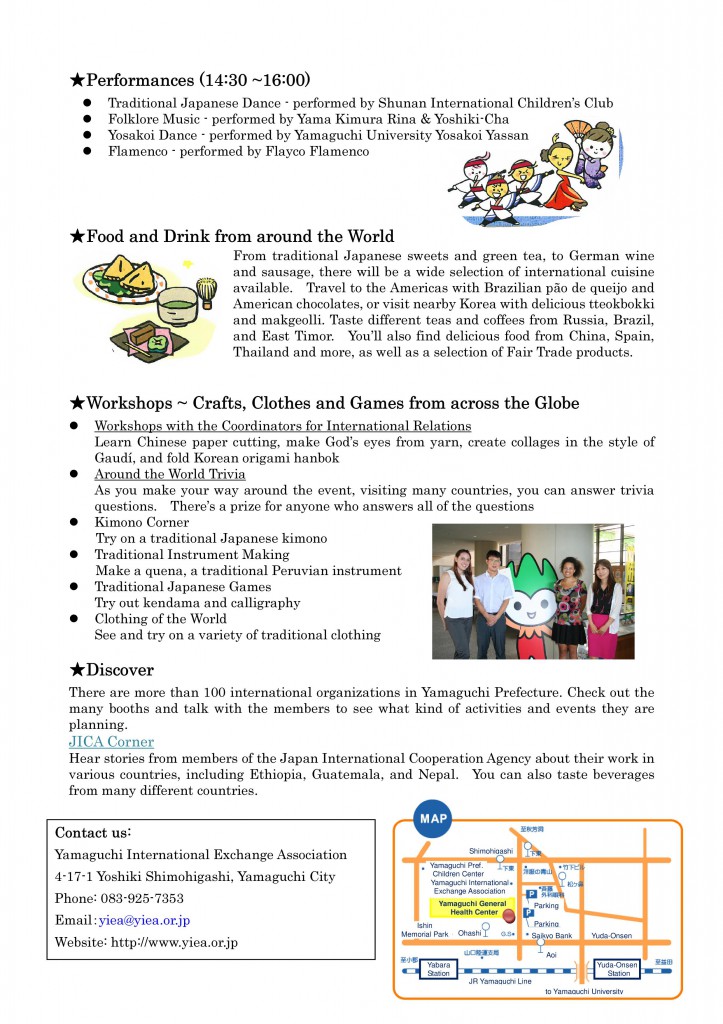